Ann Clarke has been studying the lithics (flints and other stones) found during the fieldwalking. A total of 1586 flaked lithics were collected during fieldwalking of several locations along the River Dee. This short report is produced with a view to indicating areas of potential consideration for future planned field walking. It is not a final assessment of the assemblages. This is an initial report and the information will be fed into the mapping to allow the locations of Mesolithic finds to be plotted. We will then be sourcing funding to test pit at these locations to determine if structural remains survive.

A table is presented below for each location showing types and totals of flaked lithics. A short summary of the characteristics of each assemblage with reference to dating activity is also given. 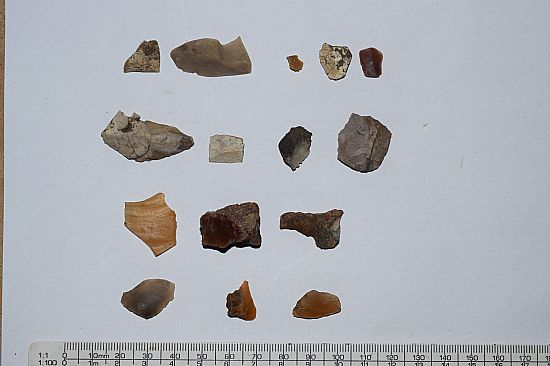 Mesolithic with microliths of various forms: a broad triangle, a long triangle and crescent 29mm and 25mm in length; and two backed narrow blade microlithic fragments. Also two oblique truncations and a microburin.