Guidance for Investigating and Managing Lithic Scatter Sites in Scotland 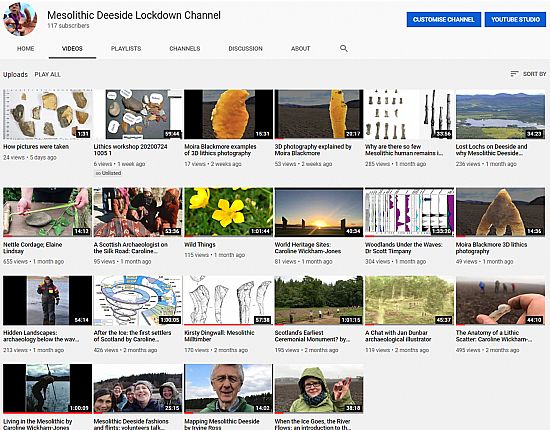 Living in the Mesolithic: Caroline Wickham-Jones

Why Are There So Few Mesolithic Human Remains in Scotland?: Chantal Conneller

Lost Lochs on Deeside and Why Mesolithic Deeside Should Be Interested: Michael Stratigos

Woodlands Under The Waves: Scott Timpany

The Anatomy of a Lithic Scatter: Caroline Wickham-Jones

After The Ice the First Settlers of Scotland: Caroline Wickham-Jones

When the Ice Goes The River Flows: Sheila Duthie and Alison Cameron

FIELDWALKING IS NOW COMPLETE AND WE HAVE HAD A SUCCESSFUL SEASON. WE HAD LOTS OF NEW AND EXISTING KEEN VOLUNTEERS AND FOUND LOTS OF LITHICS.  WE WILL UPDATE ON EVENTS OVER THE SUMMER AS WE ORGANISE THEM (VIRUS PERMITTING) 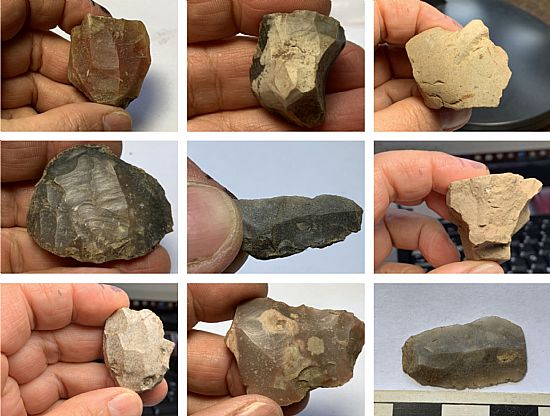 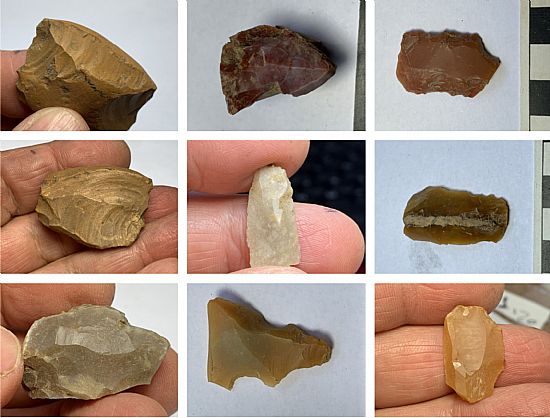 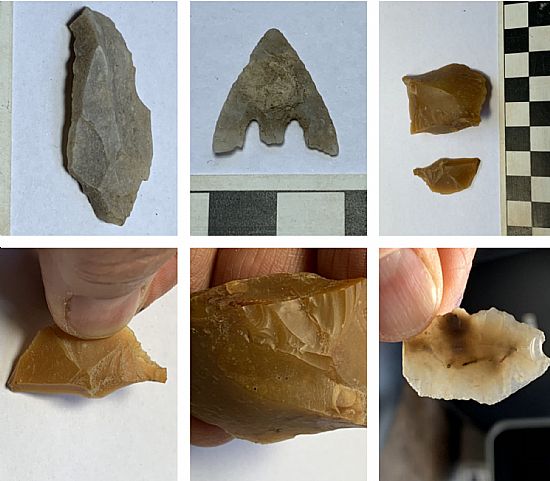 Some lithics from fieldwalking recently

Mesolithic Deeside is a group of archaeologists, students and local volunteers investigating the river Dee area 10,000 years ago. The river Dee is in Aberdeenshire in NE Scotland.

Mesolithic Deeside has received a Heritage Lottery Fund (HLF) Stories, Stones and Bones grant. This exciting project, Ancient Deeside has been given £10,000  to enable the group to extend fieldwalking along land bordering the the River Dee, to analyse the flints collected and cascade information from the finds to local people. This project is part of Scotland’s Year of History, Heritage and Archaeology.

This pilot project, Ancient Deeside, part of the wider Mesolithic Deeside group focuses on the Mesolithic period, 8000-4000BC, immediately after the last Ice Age. The inhabitants of Scotland at the time comprised mobile groups of hunter-fishers who left little trace of their passing so that the archaeological evidence is formed mainly of stone tools of flaked flint.

The River Dee, in Aberdeenshire, runs from the mountains and glens of the Cairngorms to the coast at Aberdeen. Ancient stone tools found along its length attest to 10,000 years of human settlement from the earliest hunter-fishers of Scotland onwards. Archaeological work has involved academic research as well as community-led fieldwalking, but there has been no systematic study to combine information into an overview of the early activity along the river.

The Ancient Deeside Project  aims to combine the study of known Mesolithic material with new material obtained from fieldwalking, thereby adding to our understanding of the period. The project will involve volunteers including  local people, students and schoolchildren. The aim is to train participants in fieldwalking, finds analysis, recording, photography, archaeological cataloguing, the Mesolithic period and archaeology in general.

We are hoping to involve local primary and secondary schools and will host open events to pass on our findings to the wider community.

Commenting on the award, Diane Collinson, Secretary of Mesolithic Deeside, said: “It’s fantastic that we have been awarded this grant. We have a group of enthusiastic volunteers from the local area who are keen to discover more about the Mesolithic period in Deeside.  We are all really looking forward to fieldwalking and learning more about flint analysis, then telling other people about our findings and sharing our heritage and history with them.”

Comment from Caroline Wickham-Jones, archaeological consultant specialising in the Mesolithic period: ‘The Mesolithic finds along the River Dee comprise a significant resource for archaeology. The assistance of the Heritage Lottery Fund will play a vital role in allowing this dedicated group of local people to develop their skills and share their enthusiasm for a period that, while elusive, is also fascinating.’

Commenting, Bruce Mann, Aberdeenshire Council Archaeologist, said: “It can be easy to see Deeside as just being about the history of its royal connections. What this project is attempting to do is create a better understanding of another key part of the areas’ history, the origins of human activity here. It will change our perceptions, which is hugely exciting.”

The Lithics page contains an initial report on the flint and other stone finds and the information will be fed into the mapping to allow the locations of Mesolithic finds to be plotted. We will then be sourcing funding to test pit at these locations to determine if structural remains survive.

For a Map of all fieldwalked fields link to pdf HERE